Situation of the wind energy industry

Differences respect the adoption of renewable energies between different countries are still important. Despite of this, the process of global energy transition is an increasingly consolidated reality. In 2018 for the third year in a row, more solar and wind energy capacity has been installed worldwide than the sum of coal, gas and nuclear power plants combined.

In Europe according to WindEurope, 11.7GW of power have been installed during 2018, of which 2.65GW correspond to offshore projects. The leadership is Germany, followed by Spain. The total wind power installed in Europe is 189GW, permitting to avoid the emission of 208 million tons of CO2 into the atmosphere.

35% of the world’s wind power is installed in Asia with a total capacity of 188GW. Apart of China, other Asian wind powers are India, with a total of 35GW, Pakistan, Thailand and Vietnam.

In North America, the United States (2nd in the world ranking with 96.6GW installed) and Canada (8th, with 12.8GW installed) are leading the ranking. Large corporations such as Google, Apple, Nike, Wal-Mart,… are pressuring more and more the energy corporations by signing contracts to purchase only clean energy

In South America is Brazil, producing 14.7GW the country leading the ranking, having growth 2GW during 2018.

Forecast for a medium and long term future in Europe

According to WindEurope’s “Scenarios for 2030” and “Outlook to 2020” reports, Wind Power could provide 16.5% of Europe’s energy by 2020. This figure would reach 30% by 2030, with a total installed capacity of 323,000MW. In countries such as Denmark, The Netherlands, Ireland and Estonia, wind power will be the main source of energy in the electricity supply in that year.

With these figures it will be possible to avoid the emission of 382 tons of CO2 annually and create 569,000 jobs directly related to this energy source.

This will require the creation of new wind farms, both “on” and “offshore”, as well as the repowering and extension of the useful life of the current wind fields. 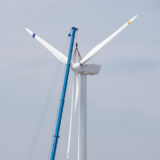 The investments necessary for building wind farms are considerable and therefore, promoters need to ensure the viability of their projects,…

The obstacles marking is intended to reduce the risk of collision for aircrafts. All fixed and mobile objects that are…